The art of determining and representing the relative height or elevation

of different object/points on the surface of earth is called leveling. It deals with measurement in vertical plane.

By leveling operation, the relative position of two points is known whether the points are near or far off. Similarly, the point at different elevation with respect to a given datum can be established by leveling.

The instrument which are directly used for leveling operation are:- Level, Levelling staff

Level: – An instrument which is used for observing staff reading on leveling staff kept over

different points after creating a line of sight is called a level.

The difference in elevation between the point then can worked out. A level essentially consists of the following points:

Telescope consists of two tubes, one slide into the other and fitted with lens and diaphragm having cross hairs. it creates a line of sight by which the reading on the staff is taken

The essential parts of a telescope are

The dumpy level is simple, compact and stable instrument. The telescope is rigidly fixed to its supports. Hence it cannot be rotated about its Longitudinal axis or cannot be removed from its support. The name dumpy is because of its compact and stable construction. The axis of telescope is perpendicular to the vertical axis of the level. The level tube is permanently placed so that its axis lies in the same vertical plane of the telescope but it is adjustable by means of captain head not at one end.

The ray shade is provided to protect the object glass. A clamp and slow motion screw are provided in modern level to control the movement of spindle,

about the vertical axis. The telescope has magnifying power of about thirty diameters.

seconds of are per graduation. The telescope may be internally focusing or external Focusing type.

Adjustment of the level

These adjustments are performed at each set-up the level before taking any observation.

particular graduation position to suit his eyes,This will save much time of focssing the eye piece.

(d) Focusing the object glass: – Direct the telescope to the leveling staff and on looking through the telescope, turn the focusing screw until the image appears clears and sharp. The image is thus formed inside the plane of cross hairs, Parallax,if any is removed by exact focusing. It may be noted that parallax is completely eliminated when there is no change in staff reading after moving the eye up and down.

There are two systems of reduced levels

In this system, there is no need to determine R.L. of plane of collimation .The difference of level between consecutive points are obtained as described below.

When the B.M of staff station is above the line of collimation (or line of sight) the staff is held inverted on the point and reading is taken .This reading being negative is entered in the level field book with minus sign, or to avoid confusion, ‘Staff inverted’ should be written in the remarks column against the entry of the reading. 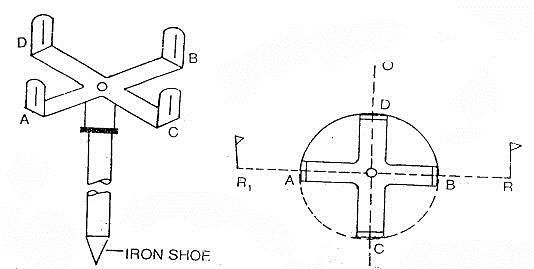 The results are tabulated as below:

When the reading on the inverted staff is a foresight or intermediate sight .it should also be recorded in field book with minus sign

The R.L. of such points may be worked at as: R.L.of the point (where the inverted staff is held)

The various reduced levels are calculated by rise and fall method and by using height or plane pf collimation method and are shown in observation table.

To determine the initial and final setting times for the given sample of cement.

Analysis and Design of Two way Slab with beams

How Interior Painting Can Benefit Your Business

The Basics of Installing an Air Conditioner in Your Home

ABOUT US
Construction how is a Professional blogging Platform. Here we will provide you only interesting content, which you will like very much. We’re dedicated to providing you the best of blogging , with a focus on dependability and construction news. We’re working to turn our passion for blogging into a booming online website. We hope you enjoy our blogging as much as we enjoy offering them to you. I will keep posting more important posts on my Website for all of you. Please give your support and love. Thanks For Visiting Our Site.
Contact us: contact@constructionhow.com
© ConstructionHow
MORE STORIES