In concrete construction works, well-selected materials and proper mix design procedures can affirm the strength and performance of concrete.

However, one must be cognizant of the importance of intermediate or transitional steps between concrete batching and finishing. These steps define the handling of concrete and any careless approach is likely to alter the results in a jiffy.

Proper handling of concrete involves propriety in batching, mixing, transportation, placing, compacting, curing, and finishing operations. All these activities are sequential and are to be executed timely and cautiously. The figure below schematically conveys the handling of concrete.

The first step in concrete preparation is defining the proportions of various ingredients (cement, sand, coarse aggregates, water) in a unit volume of concrete. This is termed as batching of concrete. Batching may be done by weight or by volume, the former being more accurate. The code specifications must be taken into account while batching. 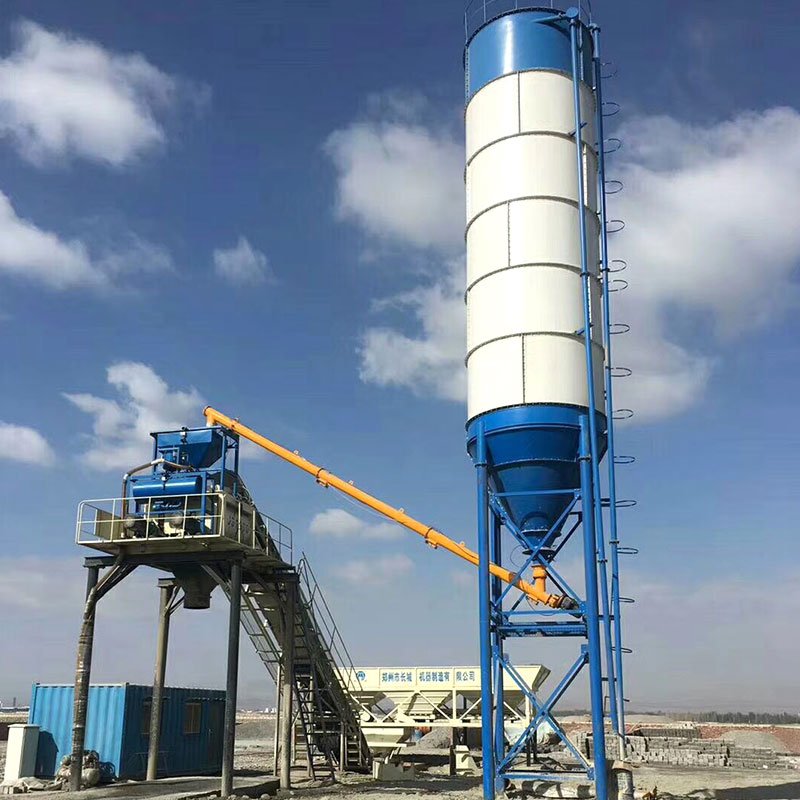 Once the ingredients are batched by volume or weight, they are introduced in a mixer and subjected to mixing. Initially, the dry ingredients are mixed for a small duration of time followed by the addition of water.

Once water is added, thorough mixing is carried out to ensure that the mass is homogenous, uniform in color, and consistent. Mixing may be done by hand or machine; however, the latter is preferred. 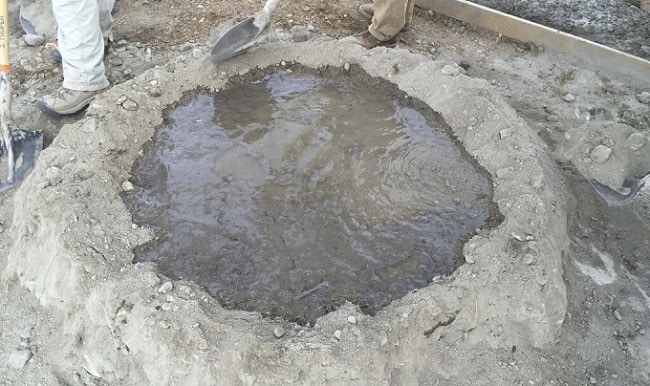 A batch mixer prepares concrete batch by batch. It can either be a tilting-drum type (T) mixer, a non-tilting drum (NT) type mixer, or a reversing (R) type mixer. Mixers with tilting drums are most commonly used.

Theyare either bowl-shaped or double conical frustum type. The material is added into the mixer by hand or is skip-fed. This type of mixer can easily be tilted in the downward direction for unloading mixed concrete.

The pros of using this mixer include the production of a concrete mix having relatively low workability, containing large aggregate sizes. However, a part of the cement mortar that clings or adheres to the mixer drum is often left out and not discharged which makes the use of this mixer a little disadvantageous. 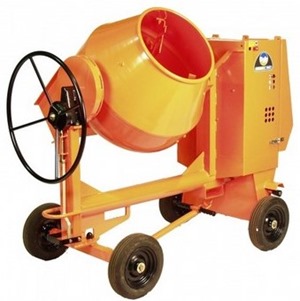 Itconsist of cylindrical drums that are incapable of tilting. However, the drum is open from two sides and revolves about the horizontal axis. The dry mix is entered into the mixer at one end and the wet concrete is discharged from the other end. This type of mixer causes segregation owing to the slow discharge of concrete through it. 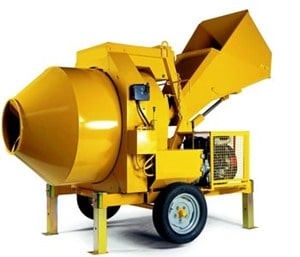 They are used for important concrete works. They are also termed forced action type mixers. The mixer consists of blades of two types functioning for different causes. One set of blades is used for mixing the concrete whilst the rotation of the drum, while the other set discharges the wet concrete as the drum is reversed. 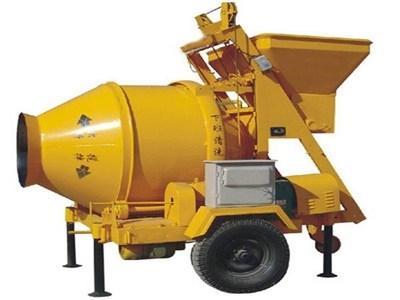 They are immovable and manufacture concrete either in the precast factory or at the central mixing plant. Their use is particularly worthwhile for stiff, homogeneous, and cohesive mixes. The pan or drum consists of two halves that are capable of rotating about the horizontal axis.

The circumferential speed at which both the halves rotate is different. This propels the concrete towards the center of the drum, producing some stirring up or turbulence that ultimately yields a homogenous mix of heterogenous concrete.

Batch mixers are available in various capacities. For general works, (10/7) th or (1/4) th cubic yard capacity mixers are used. 10/7 means that 10 cubic feet of dry ingredients will produce 7 cubic feet of wet concrete. The mixing time in no case is to be less than 90 seconds post addition of water for 1 cement bag capacity mixer.

The ready mixed concrete is batched in a central batching plant and delivered to the job site usually in trucks having mixers mounted on them. The concrete may be subjected to mixing during transportation or after arrival at the site. The concrete prepared using batch mixing can be kept workable or plastic for 1.5 hours by slow revolutions of the mixer.

However, it is preferred to add some water and mix again after the arrival at the site. This is termed as retempering of concrete and it aims at mobilizing the workability of concrete by adding some water into the prepared mix.

As the name suggests, these mixers are capable of providing a continuous discharge of wet concrete till the operation is deliberately put to a pause. The materials are loaded into the drum of the mixer that operates by the slow and continuous spinning of the blades mounted inside.

These mixers are used for large-scale projects that require an uninterrupted outflow of concrete during construction operations as in the case of a dam or bridge. 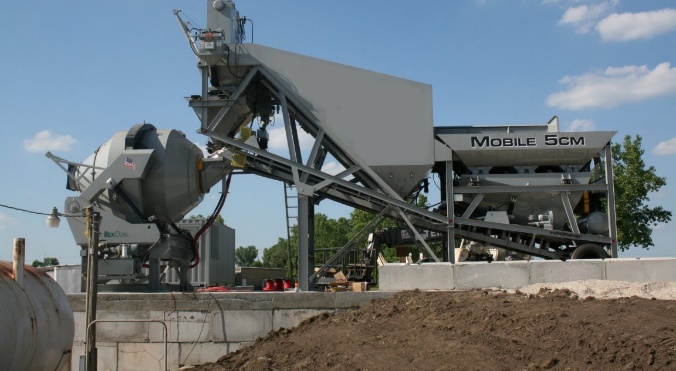 In order to prevent cement from adhering to the blades or bottom of the mixer, a small quantity of water (about 25%) is usually added to the drum. The dry ingredients are then introduced into the mixer in sequential order, adding half the coarse and fine aggregates first, followed by the addition of the entire cement. After this, the remaining half of coarse and fine aggregates is added followed by the addition of remaining water.

The mixing time is initiated once the entire pre-determined water quantity is fed into the mixer. The mixer speed is generally kept between 25 to 30 rpm and the mixing time also hinges on the mixer capacity.

The concrete is carried or transported to the site where it is to be placed or deposited. It should be ensured that during transportation neither does the concrete harden before time nor does it segregate or bleed. The transportation of concrete can be accomplished either manually or mechanically.

It can be done using barrows or buckets and is employed for small concrete activities when the place of deposition is close to the place of mixing. 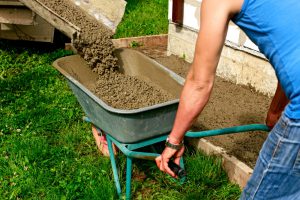 It is preferred when the place of deposition is distant from the place of mixing. It is done using belt conveyors, dumpers, pumps, and lifts. In every case, the partial setting of concrete is to be prevented by consuming minimum time in transiting the concrete.

Dumpers, lorries, or trucks can transport concrete up to 5km and prove economical. During the transit process, the concrete should be covered with tarpaulins to prevent the evaporation of water. 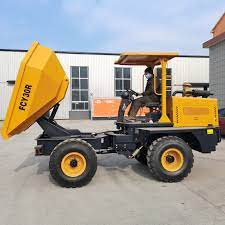 They are used for concreting operations in multi-story buildings. The concrete is transported to the intended site using pipes that intake concrete from pump cylinders. Pumping can be carried out for as long as 400m and as high as 80m. This operation also partially compacts the concrete. 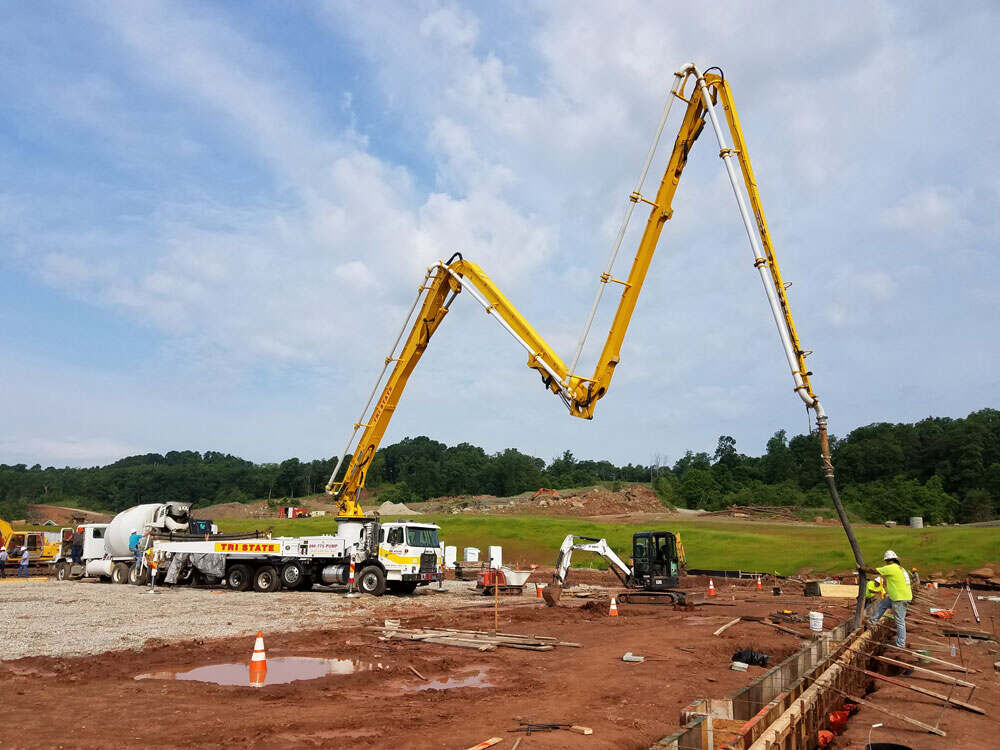 Placing of concrete refers to its deposition at the requisite site in the required shape. While placing the concrete, large lifts and free-falls must be avoided.

This possibly leads to segregation of concrete. When the concreting operating is to be halted for a certain duration of time, it is imperative to make grooves or construction joints in the finished work before its setting and hardening. This aims at effective bonding of sequent concreting work with the previous one. 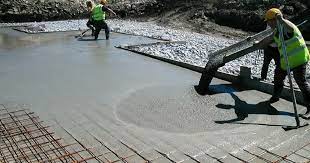 Once the concrete is placed, it is to be consolidated in order to remove the air voids and densify it. Voids in concrete can have a derogatory impact on its strength. Quantifying the strength decrement, only 5% of air voids may reduce the strength of concrete by 30% or even more.

In addition, the concrete becomes permeable as the voids increase and this can spur the ingress of moisture, ultimately causing spalling of concrete and corrosion of reinforcement. This necessitates the compaction of wet concrete which can be achieved manually or mechanically.

It may be adopted for small or unimportant concrete works and is done using tamping or rodding. The wet concrete is spurred or stirred using a steel rod for an optimum number of times. 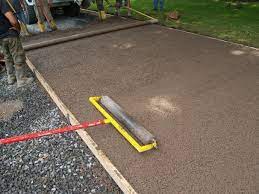 It is done using vibrators that can be external or internal type. It is adopted for general concrete works. The vibrations decrease the inter-particle friction by setting them in motion. This densifies the concrete, eliminating any entrapped air. Vibrators can be needle vibrators (also called internal vibrators) or formwork vibrators (the external type). 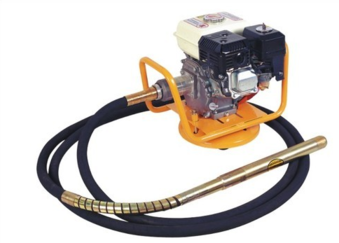 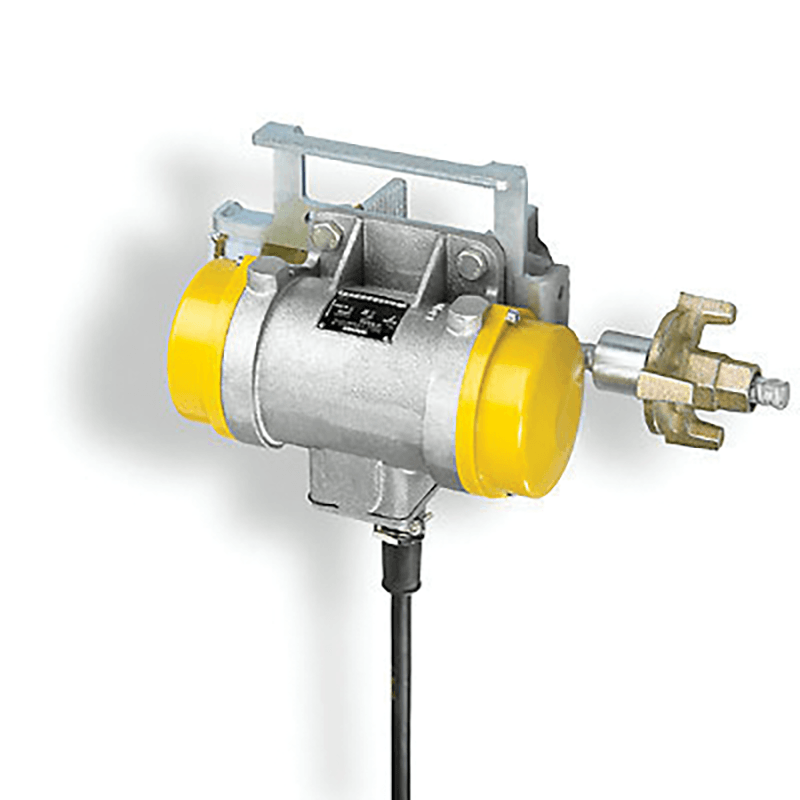 When the concrete initially hardens and sets in place, moisture escape from the concrete body can create voids and ultimately result in huge strength loss. This is because concrete keeps on gaining strength for several weeks once it hardens initially.

Therefore, concrete needs to retain water that otherwise may evaporate leaving pores inside the body. To help concrete gain strength, curing is to be done and the method adopted depends upon the site conditions. The following curing techniques can generally be adopted:

Fig.: Curing by the sprinkling of water 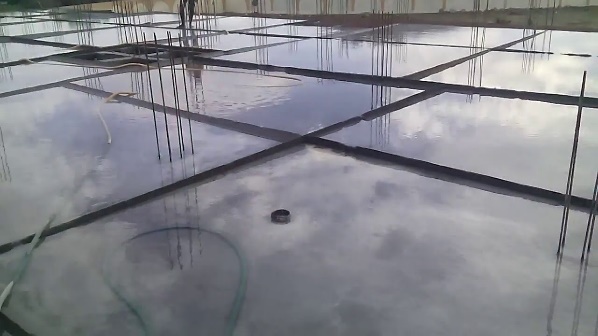 The manufacture of ordinary Portland cement involves a myriad of steps, each of which is to be carried…