The main properties of hardened concrete are:

Types of Modulus of Elasticity Relation between Modulus of Elasticity and Strength

Where, Ec = short term static modulus of elasticity in N/mm2 I) Influence of Aggregates

Effects of Creep on Concrete and Reinforced Concrete

Types of Shrinkage in Concrete

Shrinkage can be classified in the following way:

Shrinkage of this type manifests itself soon after the concrete is placed in the forms while the concrete is still in the plastic state. Loss of water by evaporation from the surface of concrete or by the absorption by aggregate or subgrade is believed to be the reasons of plastic shrinkage. The loss of water results in the reduction of volume. The aggregate particles or the reinforcement comes in the way of subsidence due to which cracks may appear at the surface or internally around the aggregate or reinforcement. In case of floors and pavements where the surface area exposed to drying is large as compared to depth, when this large surface is exposed to hot sun and drying wind, the surface of concrete dries very fast which results in plastic shrinkage. Sometimes even if the concrete is not subjected to severe drying, but poorly made with a high water/cement ratio, large quantity of water bleeds and accumulates at the surface. When this water at the surface dries out, the surface concrete collapses causing cracks. Plastic shrinkage can be reduced mainly by preventing the rapid loss of water from surface. This can be done by covering the surface with polyethylene sheeting immediately on finishing operation; by fog spray that keeps the surface moist; or by working at night. Use of small quantity of aluminium powder is also suggested to offset the effect of plastic shrinkage.

Similarly, expansive cement or shrinkage compensating cement also can be used for controlling the shrinkage during the setting of concrete.

Just as the hydration of cement is an ever lasting process, the drying shrinkage is also an ever lasting process when concrete is subjected to drying conditions. The drying shrinkage of concrete is analogous to the mechanism of drying of timber specimen. The loss of free water contained in hardened concrete, does not result in any appreciable dimension change. It is the loss of water held in gel pores that causes the change in the volume. Under drying conditions, the gel water is lost progressively over a long time, as long as the concrete is kept in drying conditions. Cement paste shrinks more than mortar and mortar shrinks more than concrete. Concrete made with smaller size aggregate shrinks more than concrete made with bigger size aggregate. The magnitude of drying shrinkage is also a function of the fineness of gel. The finer the gel the more is the shrinkage.

Carbon dioxide present in the atmosphere reacts in the presence of water with hydrated cement.Calcium hydroxide [Ca (OH) 2] gets converted to calcium carbonate and also some other cement compounds are decomposed.  Such a complete decomposition of calcium compound in hydrated cement is chemically possible even at the low pressure of carbon dioxide in normal atmosphere.  Carbonation penetrates beyond the exposed surface of concrete very slowly.

The typical relationship between shrinkage and time for which concrete is stored at different relative humidities is shown in Figure.

The graph shows that the magnitude of shrinkage increases with time and also with the reduction of relative humidity.

In numerous structural applications, such as bridge decks and pavements, concrete members are subjected to repeated applications of load at a level below the ultimate strength of the concrete. Like most materials, concrete exhibits fatigue behaviour, that is, when subjected to cyclic loading of a given level but below its short-term static strength, it will eventually fail. Fatigue strength is the greatest stress that can be sustained for a given number of stress cycles without failure. The impact strength of concrete increases with its static compressive strength at progressively increasing rate which is shown in figure below: That factors which effects concrete strength are Effect of Porosity, Water-Cement Ratio and Aggregate Size

I) EFFECT OF POROSITY

The hydrated cement paste contains several types of pores which have an important influence on its properties:

Gel pores are very small (about 2 nm in diameter) and the volume of gel water is about 28% of the cement gel. The pore size is too small to have an adverse effect on the strength and permeability of the hydrated cement paste. ‘Gel Water’ can be held by hydrogen bonding, and its removal under certain conditions may contribute to drying shrinkage and creep. Capillary pores represent the space not filled by the solid components of the hydrated cement paste. Capillary pores are much larger than gel pores (diameter about 1 mm). For fully hydrated cement with no excess water above that required for hydration, capillary pores is about 18.5% of the original volume of dry cement. These pores can be empty or full of water, depending on the amount of water in the mix. When cement is partly hydrated, the cement paste contains an interconnected system of capillary pores. The effect of this is a lower strength and, through increased permeability, a higher vulnerability to freezing and thawing and to chemical attacks.

These problems are avoided if the degree of hydration is sufficiently high for the capillary pore system to become segmented through partial blocking by newly developed cement gel.

Air voids are generally spherical. A small amount of air usually gets trapped in cement paste during concrete mixing.  There are two types of air voids: (i) Entrapped air voids (may be as large as 3 mm) and (ii) Entrained air voids (usually range from 50 to 200 μm). Both these voids in hydrated cement paste are much bigger than capillary voids and are capable of adversely affecting the concrete.

In civil engineering practice, the strength of concrete at a given age and specified curing temperature primarily depends on two factors: From the above figure, compressive strength is at peak, when water to cement ratio is low. Beginning of the curve depends on the available means of compaction (that is either done with vibrators or manually hand compaction). If large size aggregates is used with low w/c ratio and high content of cement, then it exhibits retrogression of the concrete strength.

A conclusion can be made that if there is a low w/c ratio in a fresh mix than after hardening, w/c will not be able to lead to higher strength of concrete due to development of tensile stresses due to shrinkage and creep.

When concrete is fully compacted, its strength is taken to be inversely proportion to the w/c ratio.

K1 and K2 are empirical constants.

The larger maximum size aggregates gives lower surface area for developments of gel bonds which is responsible for the lower strength of the concrete. Secondly bigger aggregate size causes a more heterogeneity in the concrete which will prevent the uniform distribution of load when stressed.

When large size aggregate is used, due to internal bleeding, the transition zone will become much weaker due to the development of micro cracks which results in lower compressive strength.

Relationship between strength of concrete and gel/ space ratio according to Powers:

Where, x is the gel/space ratio and 240 represents the intrinsic strength of the gel in MPa for the type of cement and specimen used.

Concrete, in general, is a concoction of cement, aggregates and water. Each of these components accounts for a…

Concrete is a sundry mixture of a number of constituents, each of which is added to hit a… 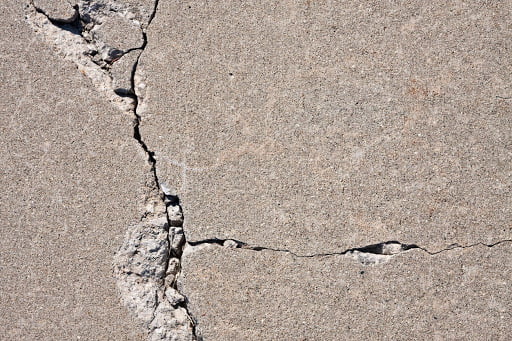