The main objective of this job is to calculate the horizontal angles in the field using the method of reiteration.

Theodolite is to be supported and clamped to a stand for properly carrying out survey operations, and for this purpose tripod stand is used. It is a stand with three legs having pointed iron shoes at the lower end of each leg to prevent an imbalance of instruments. The upper surface of the tripod head contains an external screw to which the theodolite is attached

It is the process of setting up the theodolite over the station point and it is accomplished when the vertical axis of theodolite passes through the ground station mark.

The sum of all the angles at the reference station should be equal to 360 degrees provided that the instrument is not disturbed while taking observations. If the discrepancy is small, then it is distributed equally to all sighted stations. But if the difference is large then the set is discarded and new readings are taken.

The reiteration method is also called as the direction method of observation of horizontal angles. 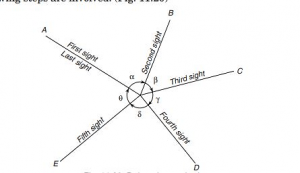 Statement: To determine tension in various points of a hanging rope loaded at different Points. Purpose: To compare…

Objective The performance of this experiment targets the following objectives: To measure the volume flow rate or discharge… Objective: The primary aim of this survey job is to set out perpendiculars at various points on a…