For fluids, flow measurement is indispensable if we are to regulate the control processes, safety, and economy. In case of fluid discharge through a pipe, the flow quantification can be done using a number of devices one of which is a venturimeter.

It is a non-prismatic short tube whose diameter tapers from the converging zone (or the inlet) to the throat and then from the throat to the diverging zone. A venturimeter is simply installed between any two points in a pipe and measuring the pressure head difference, it dictates the value of discharge through the pipe cross-section. 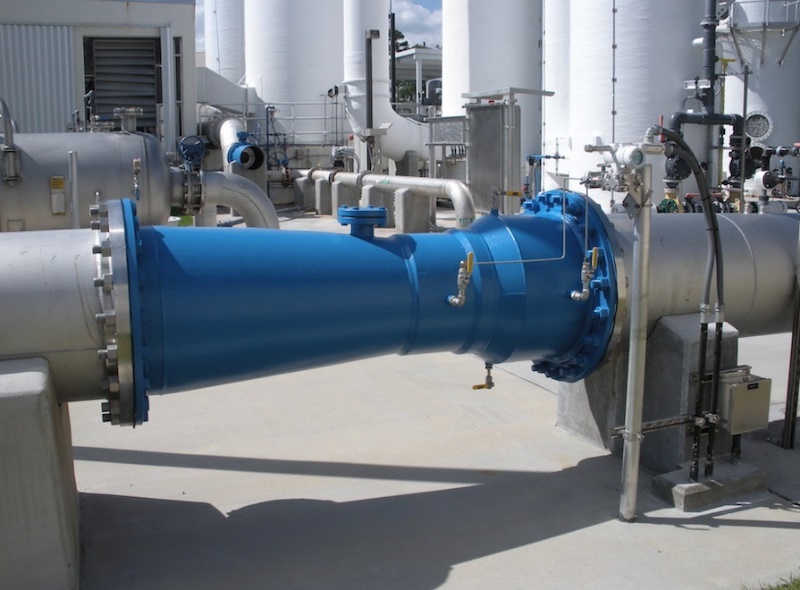 A majority of flow measurement devices, including the venturimeter are based on Bernoulli’s equation which itself is a manifestation of the law of conservation of energy. Theoretically, the Bernoulli’s theorem holds for ideal fluids having a steady, incompressible, and irrotational fluid flow and is defined for the same as, “The total energy at any point in a fluid remains constant.”

The total energy of a fluid can be apportioned into its potential, kinetic, and pressure energies that are usually expressed in the form of the head of fluid (i.e., its energy per unit weight). Therefore, mathematically, Bernoulli’s theorem can be written as:

Where the first term on the left gives the pressure head, the second term represents the kinetic head and the last one is indicative of the potential head of fluid.

Pragmatically, the existence of such an ideal fluid is out of the question. However, the eponymous theorem can also be applied for practical fluid problems by accounting for the losses incurred in the flow. This means that for real fluids, the loss in the head is inevitable, and therefore, for any two points lying in the fluid flow path, Bernoulli’s theorem is stated mathematically as:

Where hL represents the head losses in the fluid flow from point 1 to point 2.

The figure shows a venturimeter fitted in a horizontal pipe containing a fluid flowing through it. It can be seen that a venturimeter consists of 3 main parts;

In order to find the discharge through any pipe, it is attached between any 2 points on the pipe. The venturimeter measures the flow rate by measuring the difference in pressure heads of the fluid as it flows from the inlet towards the throat. This is given by the difference in the levels of the limbs of the manometer and knowing this, the flow rate through the pipe can be determined. 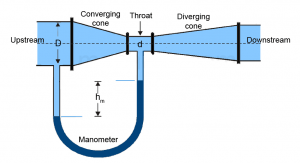 If we apply the energy equation between the two sections, we get

Since both the sections are at the same elevation with respect to any datum, both z1 and z2 will be equal and will cancel each other from both sides of the equation. Therefore, rearranging the above equation gives,

The left-hand side of the above equation shows the pressure difference between the two sections which is equal to hm as given by the manometer.

Using the equation of continuity, Av1 = av2 where A and a are the cross-sectional areas at the inlet and throat sections respectively.

Substituting the above equation in the reduced Bernoulli’s equation and rearranging it, we get,

It is to be kept in mind that the discharge at both sections will remain the same. This is because there is a conversion of energy from one form to another between the two sections but the volume per unit time through each section of the venturimeter is the same. Therefore, Q = av2.

The above equation gives the theoretical value of discharge flowing through the pipe i.e., the flow rate under ideal conditions. The actual discharge is therefore computed as:

Where Cd is the coefficient of discharge of venturimeter.

For a venturimeter, the coefficient of discharge is the ratio of the theoretical discharge to the actual discharge. Mathematically,

The value of this coefficient is always less than 1.

Following are some practical applications of venturimeter: