Since the early 1900’s sanitary engineers have been working in the United States to reduce waterborne diseases.

From an Environmental engineering point of view, substances in water can exist in one of the three classifications:

Dissolved: A substance which is truly in solution (homogeneously dispersed in liquid). Removal of substances is not possible without phase change such as distillation, precipitation, adsorption and extraction.

Suspended: In environmental engineering, suspended solids are defined as those solids that can be filtered by a glass fibre filter disc. They can be removed by physical methods like sedimentation, filtration and centrifugation.

Colloidal: Particles in the size range between dissolved substances and suspended particles. They are in solid state and can be removed by physical means e.g. very high-force centrifugation or filtration through membranes with very small pore spaces.

Sizes of particles in water 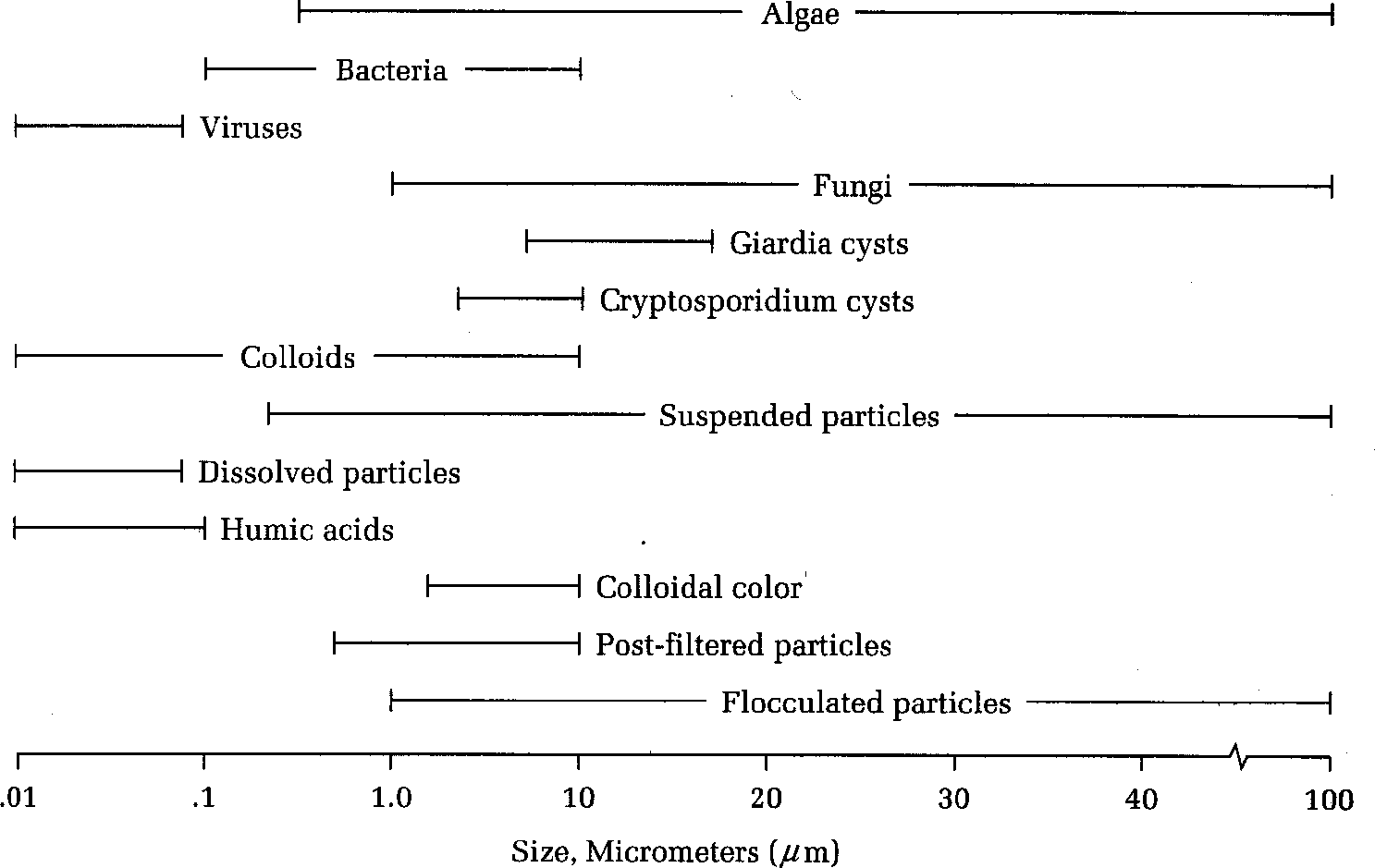 Agents that alter the quality of water as it moves over or below the surface of the earth may be classified under four major headings:

Physical: Physical characteristics relate to quality of water for domestic use and are usually associated with appearance e.g. color, taste, odour or temperature.

Chemical: Differences in water evidenced by their observed reactions e.g. performance of hard and soft water in laundering.

Radiological: Considered only when water has come in contact with radioactive substances.

Treatment systems can be into three categories:

quality and chlorination is done to ensure safe bacteria level in water.

Softening Plant (ground water treatment): During rapid mixing, chemical doses (much higher) are added to react with the hardness and precipitate it. After sufficient reaction time, precipitate will collide and grow in size in reaction basin. The other unit operations are same for both except recarbonation. 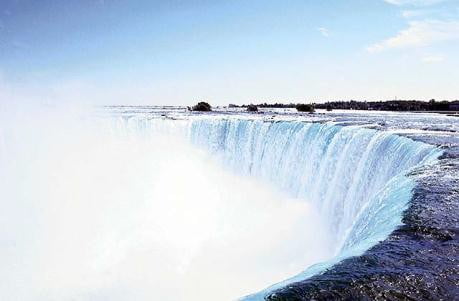 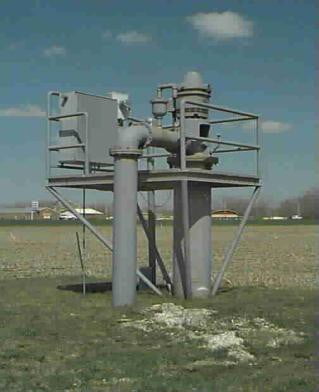 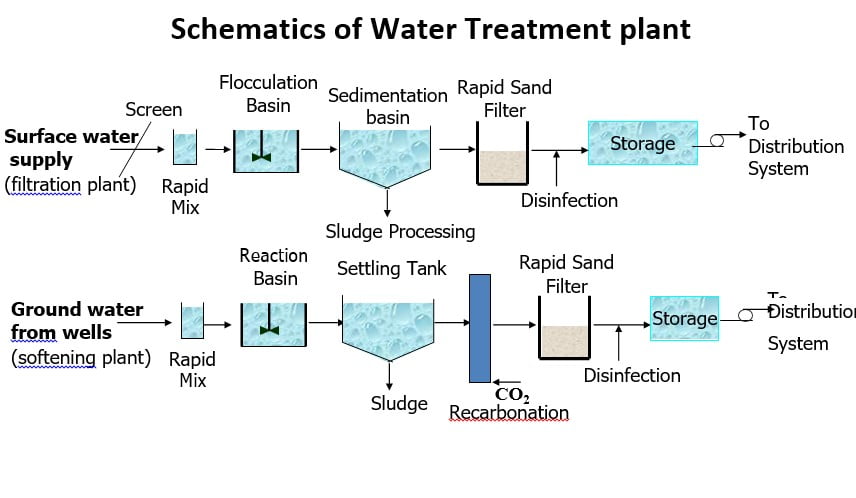 Coagulation is the process by which particles become destabilized and begin to clump together. The object of coagulation (and subsequently flocculation) is to turn the small particles of color, turbidity and bacteria into larger flocs, either as precipitates or suspended particles.

The particles in the colloid range are too small to settle in a reasonable time period and too small to be trapped in the pores of a filter. Most colloids are stable because they possess a negative charge that repels other colloids particles before they collide with one another.

Since colloids are stable because of their surface charge, in order to destabilize the particles, we must neutralize this charge. Such neutralization can take place by addition of an ion of opposite charge to the colloid. Since most colloids found in water are negatively charged, the addition of a divalent or trivalent should reduce the charge.

Collision efficiency factor α measures the degree of destabilization of colloids. If every collision results in aggregation then α= 1.0.

To alter the surface charge of the particles that contribute to color and turbidity so that the particles adhere to one another and are capable of settling by gravity.

How is this goal achieved?

Factors Which Affect the Coagulation

The factors which affect coagulation are :

These are to remove :

How does alum work? 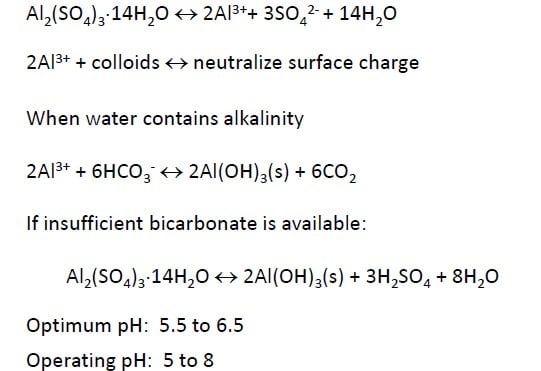 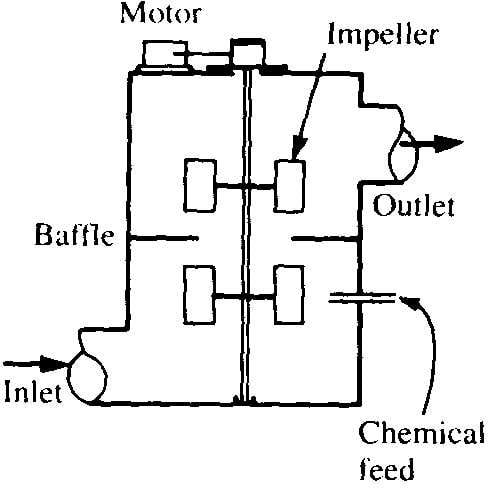 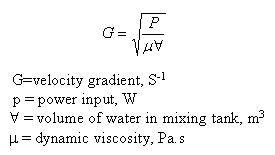 In the treatment of water and wastewater the degree of mixing is measured by the velocity gradient, G. 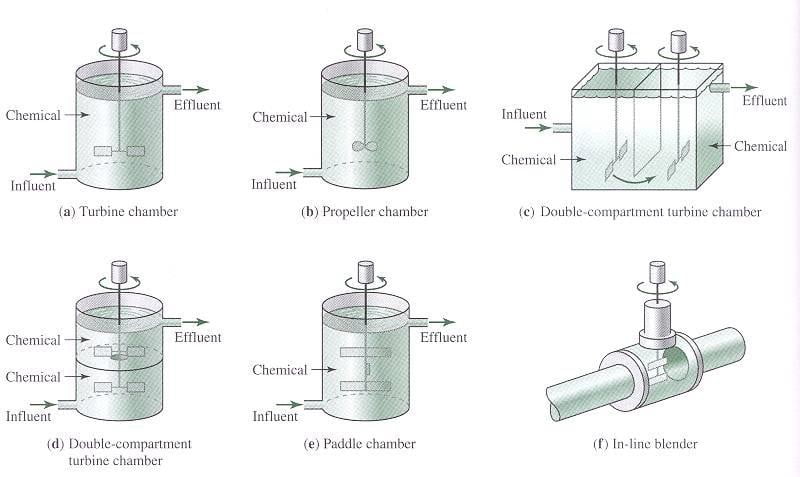 During coagulation the chemical reactions that take place in rapid mixing form precipitates, such as aluminum hydroxide or iron hydroxide. The precipitates formed in these processes must be brought into contact with one another so that they can agglomerate and form larger particles, called flocs. This contacting process is called flocculation and is accomplished by slow, gentle mixing.

While rapid mix is the most important physical factor affecting coagulant efficiency, flocculation is the most important factor affecting particle removal efficiency. The objective of flocculation is to bring the particle into contact so that they will collide, stick together, and grow to size that will readily settle. Enough mixing must be provided to bring the floc into contact and to keep the floc from settling in the flocculation basin.

Flocculation is normally accompolished with an axial – flow impeller), a paddle flocculator or a baffled chamber. The baffle-mixing basin is called also “up and down baffle mixing basin”. 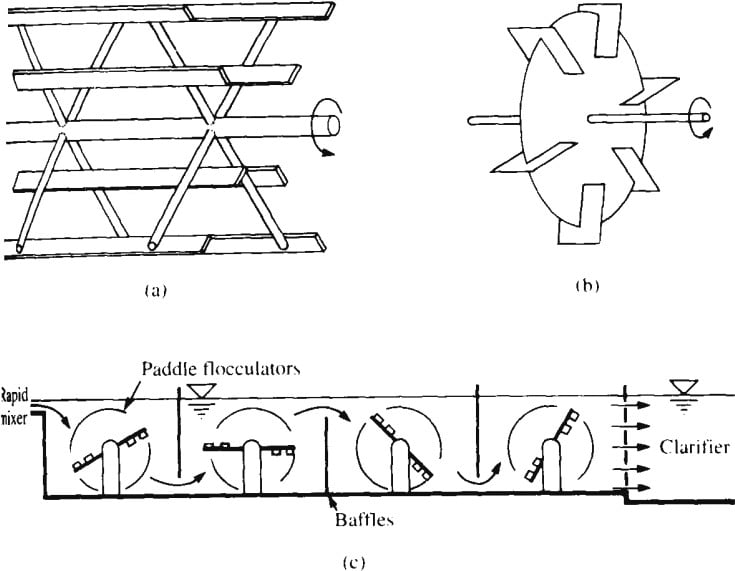 Particles that will settle within a reasonable period of time can be removed in a sedimentation basin (also called clarifier).

Sedimentation basins are usually rectangular or circular with either a radial or upward water flow pattern. Regardless of the type of basin, the design can be divided into four zones; inlet, settling, outlet, and sludge storage.

Inlet zone: The purpose of the inlet zone is to evenly distribute the flow and suspended particles across the cross section of the settling zone. The inlet zone consists of a series of inlet pipes and baffles extending about 1 m into the tank.

Settling zone: Sedimentation efficiency does not depend on the tank depth. The forward velocity should be low enough so that the settled material does not re-suspend from the tank floor. Water velocity lowers to design velocity of settling upon entering the zone.

Outlet zone: The outlet zone is designed so as to remove the settled water from the basin without carrying away any of the floc particles.

A fundamental property of water is that the velocity of flowing water is proportional to the flow rate divided by the area through which the water flows, that is :

To remove the water from the basin quickly, it is desirable to direct the water into a pipe or small channel for easy transport, which will produce a significantly higher velocity. Rather than put a pipe at the end of the sedimentation basin, it is desirable to first put a series of troughs, called weirs, which provide a large area for the water to flow through and minimize the velocity in the sedimentation tank near the outlet zone. The weirs then feed into a central channel or pipe for transport of the settled water.

There are two important terms to understand in sedimentation zone design. The first is the particle (floc) settling velocity, vs. The second is the velocity at which the tank is designed to operate, called the overflow rate, v0. The easiest way to understand these two concepts is to view a upward-flow sedimentation tank. 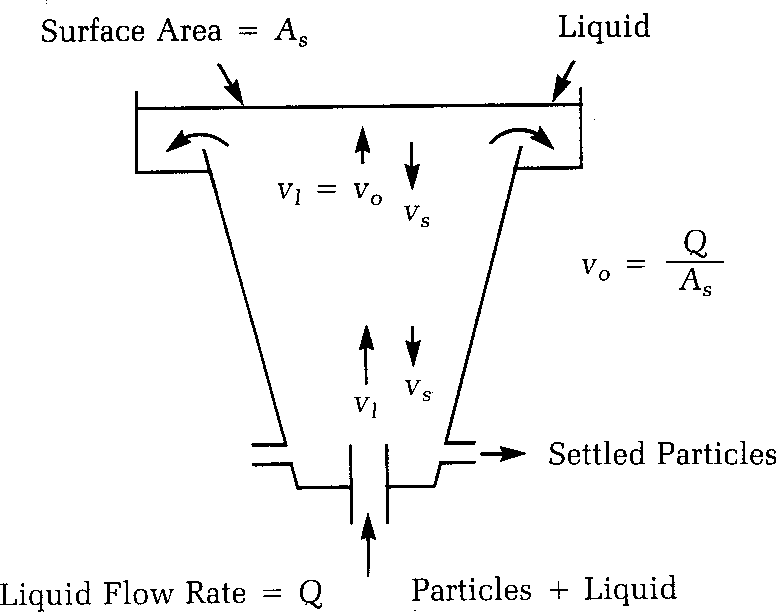 In this design, the particles fall downward and the water rises vertically. The rate at which the particle is settling downward is the particle-settling velocity, and the velocity of the liquid rising is the overflow rate.

water through a sedimentation basin 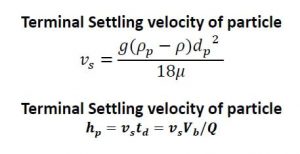 Type I: settling applies to particles that settle discretely with constant velocity. They don’t flocculate or stick e.g. sand and grit material

Water flows through a filter designed to remove particles in the water. The filters are made of layers of sand, gravel and in some cases crushed anthracite. Filtration collects the suspended impurities in water and enhances the effectiveness of disinfection. Filtration provides the additional opportunity for separation of small flocs or particles. The filters are routinely cleaned by backwashing.

There are several methods of classifying filters. One way is to classify them according to the type of medium used such as:

Another common way to classify the filters is by allowable loading rate. Loading rate is the flow rate of water applied per unit area of the filter. It is the velocity of the water approaching the face of the filter :

Some clean water in every cycle must be used for backwash and to rinse the filter after backwash.

Therefore, less than 100% water is usable.

overall throughput rate has decreased due to backwash.

Slow sand filters: Water is applied to sand at a loading rate of 2.9 to 7.6 m3/day.m2. Particles begin to collect in the top 75 mm and clog the pore spaces. As the pores become clogged, water will no longer pass through the sand. At this point the top layer of sand is scraped off, cleaned and replaced. Slow sand filters require large areas of land and are operator intensive.

Rapid sand filters: Water is applied at a loading rate greater than or equal to 120 m3/day.m2. These filters have graded (layered) sand within the bed. The sand grain size distribution is selected to optimize the passage of water while minimizing the passage of particulate matter. Rapid sand filters are cleaned through backwashing. They are most commonly used filters.

In the filter upto 99.5 % of the Suspended Solids can be removed from the water including minerals, flocs and microorganisms.

0.3 NTU in filtration. Filtration collects the suspended impurities in water and enhances the effectiveness of disinfection. It also provides the additional opportunity for separation of small flocs or particles.

Disinfection is the killing of disease causing micro-organisms. In the process coliform bacteria will be killed too and the total bacterial count (TBC) will be reduced. Disinfection is used in water treatment to reduce pathogens (disease producing microorganisms) to an acceptable level.

Chlorine is the most common disinfecting chemical used. Chlorine is used in the form of compressed gas under pressure or sodium hypochlorite (NaOCl), or as calcium hypochlorine [Ca(OCl)2]. When chlorine is added to water, a mixture of hypochorous acid (HOCl) and hydrochloric acid (HCl) is formed :

pH dependent and essentially completes within a few milliseconds

HOCl is about 80 – 100 times more effective than is OCl- for E. Coli Chlorine in the form of [HOCl] and [OCl-] is called free available chlorine

Chlorine is a strong oxidizing agent and reacts with organics and inorganics in water to form chloramines (NH2Cl (mono) and NHCl2 (di chloramine)). Di- and tri- chloramines are undesirable for taste and odour. Combined chlorine’s use has been encouraged as free chlorine contribute to the production of THMs (CHF3, CHCl3, CHBrCL2).

Chlorine destroys the extracellular system of cells. The dosages are low as 0.25-0.5 mg/l.