Cracks in a concrete structure or any of its elements are a form of dilapidation and have the ability to wreak havoc on the structure depending upon the extent they have penetrated and their origin. The primary cause of crack development is the surge in material stresses par its strength.

In a structural element, stresses are usually developed due to the applied or external loading; however, foundation settlement beyond the permissible limits, changes in moisture content of underlying foundation, thermal effects, chemical attacks, moisture ingress, etc. are all the possible factors that might be a source of uncalculated mayhem for the concrete.

In construction works involving concrete, the durability of the structure is to be considered equally important as its strength. Over time, a structure is likely to develop cracks, however, it is the responsibility of the design engineer to calibrate the design approach in such a way that the stresses in a structure or its elements remain well below the ultimate stress. This requires careful inspection of the site conditions and the anticipated loadings in the design life of the structure.

Cracks in concrete can have a variable origin and can impact variably, too. There can be a number of external or internal parameters that trigger the development of a crack in a structural element. Some of the possible reasons are enlisted below:

Flexural cracks are over-loading common in flexural members such as a beam. The development of these cracks is commenced when the external loading stresses the material beyond its flexural strength.

When a concrete beam is loaded, it bends or flexes and the amount of resistance it offers to the deforming load is a measure of its flexural strength. When the external load exceeds the beam’s flexural strength, flexural cracks originate in the highly tensed area away from the neutral axis of the beam cross-section and propagate almost perpendicularly towards the neutral axis.

As a consequence, initially, the reinforcement cover gets spalled off and further propagation ultimately results in the collapse of the beam.

The design approach in anticipating the applied loading should be on the conservative side and a reasonable factor of safety accounts for the same.

However, on the onset of flexural cracks, the beam surface should be chipped and reinforced properly, after which it is packed again with rich fresh concrete, followed by an epoxy coating and covering with carbon fiber sheet.

These cracks originate when a material fails in shear. This happens when the external load induces shear stresses in the material that surpass its shear strength. These cracks are very common near the supports of a beam.

Pure shear cracks originate at the supports and propagate at an angle of 45° to the beam’s longitudinal axis towards the neutral axis. However, a beam usually fails by a combination of flexural and shear cracking.

Shear cracking in a beam can be prevented by proper shear reinforcement in the form of shear stirrups. However, for a beam developing such cracks, the antidote is to chip the beam surface and provide shear reinforcement at adequate spacing, after which it is packed again with rich fresh concrete, coated with epoxy, and finally covered with carbon fiber sheet. 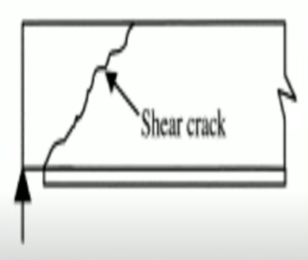 Torsion or twisting may result in cracks that propagate throughout the beam length. These cracks are nearly parallel to each other and appear to be nearly similar to the shear cracks. However, the crack development in the latter case remains the same for opposite beam faces, and this does not hold true for torsional cracks.

Proper shear reinforcement is ample to mitigate the commencement of such cracks. However, once the crack development begins, the beam is to be removed and reinforced again using U-jackets or steel plates. Following this, it is packed with carbon fiber reinforced concrete laminates.

These cracks are developed in a column and may be horizontal, diagonal, or splitting. When a column is axially loaded in compression and the applied load transcends the material strength, bulging or buckling of the column may occur depending upon its slenderness ratio.

However, prior to the actual failure of the column, the crack development process gets the ball rolling. These cracks appear owing to any plane of weakness in the column and therefore, can be horizontal, inclined, or splitting. The possible factors contributing to the consequence include over-loading, faulty design, etc.

Column cracking can be prevented by proper design and reinforcement. If in any case, the cracks appear, the concrete from the surface should be removed, the reinforcement is changed, and the column is packed with new fresh concrete by applying an epoxy coat as a bond-providing medium. Additionally, carbon fiber sheets can also be used. 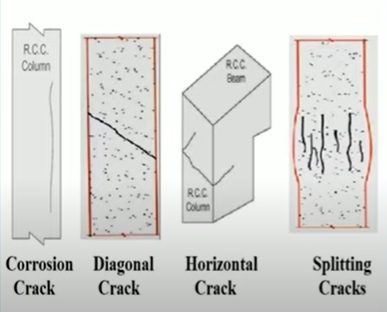 When the subsoil is inadequately compacted and a structure is constructed on such a soil, the structure’s self-weight can further compact the soil leading to cracking of the structure. These cracks are called settlement cracks because the ground settles differentially when not compacted properly. They become less extensive as they sprawl away from their origin.

Ground improvement through compaction can mitigate the occurrences of such cracks. However, crack-repair kits can be used for foundations when settlement cracks appear. 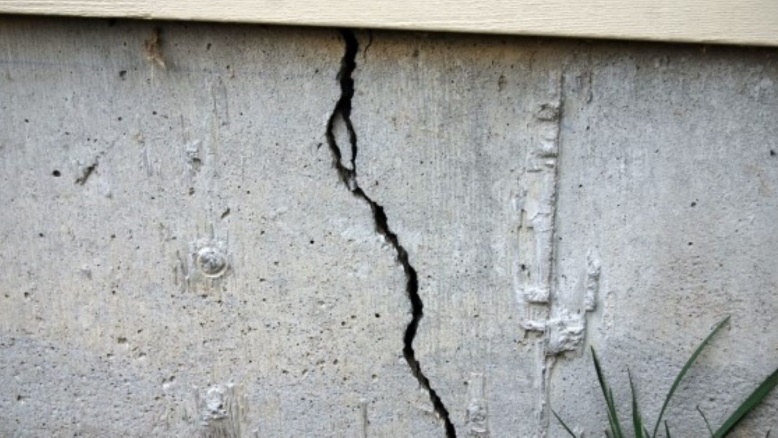 These cracks are activated owing to repeated freeze-thaw cycles. The water present in the pores of the soil exerts pore water pressure. However, when freezing occurs, the water tends to expand and exerts an uplifting force on the structure. This can lead to heaving or heaving cracks.

The site conditions must be thoroughly investigated and the water table in the vicinity of the structure must be inspected. 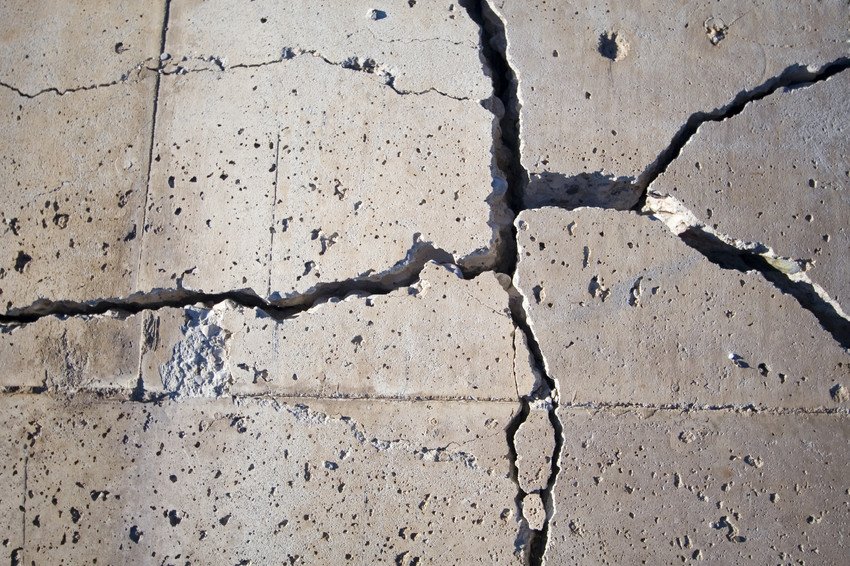 Shrinkage cracks develop when the concrete loses moisture before gaining the ultimate strength. This happens when the external factors trigger the evaporation of water as in hot weather concreting.

In order to prevent the onset of shrinkage cracking, it is imperative to help concrete retain water till its strength development becomes nearly constant. This can be done by properly curing the concrete after it gets hardened. In addition, proper plastering can also help mitigate the initiation of shrinkage cracks. 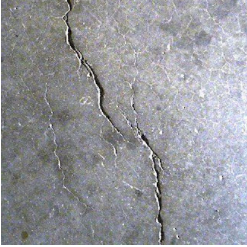 Thermal cracking in concrete occurs due to temperature differences within a structure. This can happen when a part of the structure is heated more than the other. During the hydration process, different compounds in cement hydrate at different rates and evolve different quantities of heat.

This can result in differential changes in the volume of the concrete which may lead to thermal cracking. In addition, during the hydration process, the concrete core gets heated more than its shell because the shell being exposed to the environment gets cooled quickly.

This temperature gradient triggers the formation of cracks. Thermal cracks assail the tensile strength of the concrete and therefore, proper measures are to be taken timely.

The internal temperature of concrete must be regulated. In addition, the tensile strength of concrete should also be checked, and thermal insulation can also be provided. If the cracks appear, grouting or sealing is to be done. 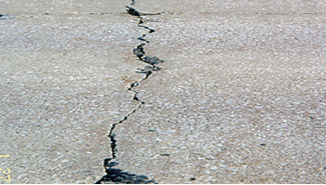 Craze cracking in concrete occurs when proper curing is not done. This happens when the concrete surface gets dried due to high temperature, wind action, or low humidity.

Moist curing the concrete for ample duration is possibly the best preventive measure. However, if such cracks attack the concrete, a thin overlay is usually the only option since the use of sealers or surface hardeners can make crazing more obvious. 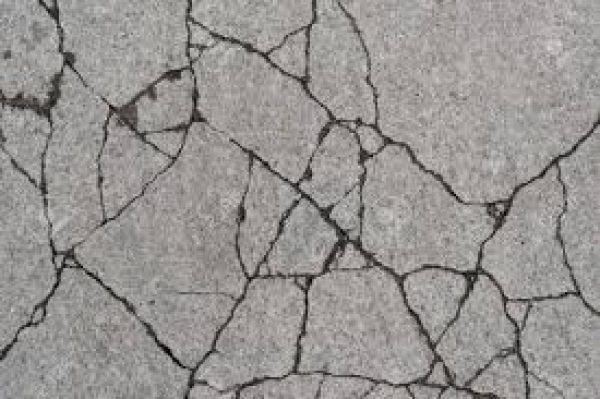 Concrete structures are vulnerable to expansion and contraction depending upon the atmospheric temperature and humidity. In hot weather, the expansion process triggers, and in cold weather, contraction takes place. If not taken into account, these processes may produce cracks in the concrete. 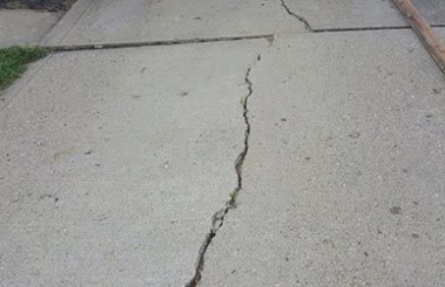 When the bond between the steel reinforcement and concrete is inadequate, the steel is prone to corrosion. This is because improper bond at the interface invites moisture and air to penetrate and attack the steel. If this happens so, the concrete gets vulnerable to cracking, preceded by spalling of the cover to reinforcement.

As a preventive measure, corrosion-resistant bars can be used. However, a remedial measure involves removing the concrete and placing new rods followed by epoxy coating and packing with fresh concrete. 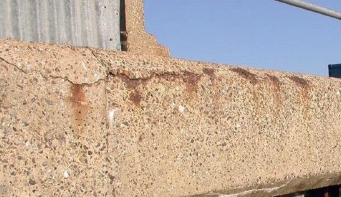 The manufacture of ordinary Portland cement involves a myriad of steps, each of which is to be carried…

Cement is one of the most common construction materials possessing cohesive as well adhesive properties. Therefore, its use… The bars used of any material as a structure stability member in the R.C.C structures are termed as…