Higher loads can affect the economic level of that structure. If we consider fewer loads, then it will lead to safety problems. So, the building should have sufficient ability to resist these loads and also fulfill the requirements economically.

This article provides a discussion of some preliminary aspects in the analysis of structure. It also deals with a brief explanation of various types of loads. These loads are considered appropriate for the analysis and design. Types of loads and economy both have a connection with each other.

The design loading is often specified in two types of codes.

Following is the classification of loads in terms of their direction.

Now, we will study these types of loads to illustrate their effects practically.

The type of loads that contain the weight of the structural members and a load of permanent objects are called Dead loads. These members include beams, columns, girders, floor slabs, walls, windows, electrical fixing, etc.

This formula is used for the calculation of Dead Loads

Below are the minimum densities of the materials for design loads. These are the common materials used for structural members that consider as dead loads. By using these design loads and unit weights, we can easily estimate dead loads for each member. They can be calculated in pounds/ft2 and kN/m2.

These are the vertical loads that can change both magnitude and direction. Live loads may be due to the following reasons.

Live loads can vary with time. These are one of the main loads in any structure. These loads are mainly depending upon the type of building. They can be concentrated as well as uniform live loads.

These are some minimum live loads according to the codes of design.

The types of buildings with large floor areas have different design codes. According to these codes, there is an allowance for the reduction in uniform live loads. By using these equations, we can calculate the reduced live loads.

It is a type of vertical load on a building that occurs due to snowfall. There are many countries where snow loads are considerable. They have a severe effect on the roof of that building. Design loadings for snow loads depend upon the following factors.

By using this formula, we can calculate the design snow load for the structure. 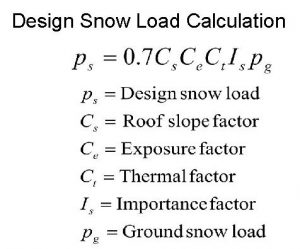 Sudden load that acts on any structural member is called Impact loading, usually there is no practical example of impacts loading on building structures.

For example if you throw a bed from 15th floor to the ground, the ground will experience impact load.

These loads include wind loads, Earthquakes loads, and some other types of loads.

It is a type of horizontal load that occurs due to the pressure of air on the building. Wind load is considerable when the height of the building is greater than 15 m. If the speed of wind is high, it can cause severe damage to the structure.

The effects of this loading may cause rackling or leaning of the building frame. Following measures are taken by engineers to resist these effects. 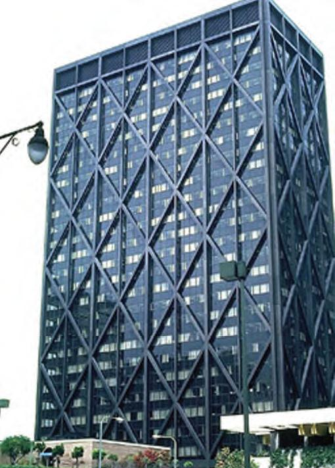 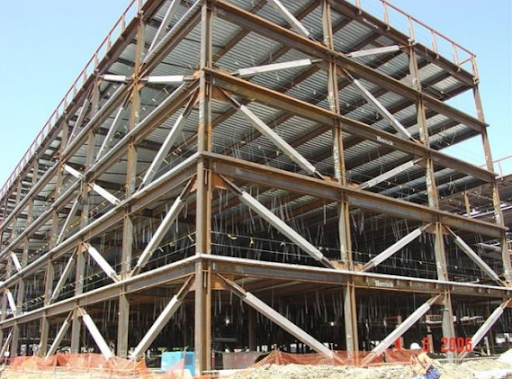 For design purposes, there are two approaches for wind loading.

In the static approach, the wind pressure is approximately equal to the mean velocity pressure acts on the structure.

Rho ρ is the density of the air

V is the velocity

This equation is further modified to account for the structure’s height and the location of its terrain. These are the following modified equations.

The lateral loading on a structure is due to the earthquakes through the structure’s interaction with the ground. This type of load involves the vibrations that cause loadings on the building. 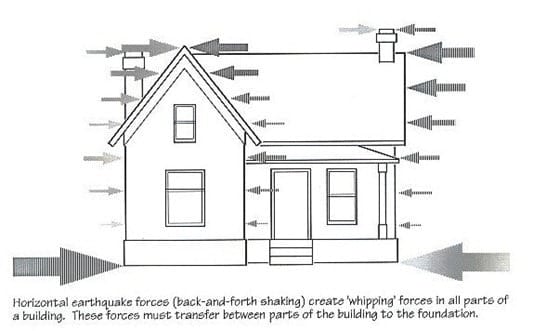 The intensity of vertical load is much lesser than the horizontal loads that are in opposite directions. Those structures that are vulnerable to earthquake loads should be designed with extra safety. According to ASCE 7-10 Standard, we can determine the base shear by the following steps.

Ie = 1 for agriculture and storage facilities

Ie = 1.5 for hospitals and other essentials

Several other types of live loads are also considered for the design of a structure, depending upon the location and its use. Some types of these loads are due to:

Analysis Of Trusses By Method Of Sections

If only a few of the member forces are of interest, and those members happen to be somewhere…

Structural elements are the primary members that form the skeleton of any structure. They are inter-connected in different…