In survey, a theodolite is an instrument mounted with a moveable telescope, used for precise measurements of horizontal and vertical angles. It can completely rotate along the horizontal plane and its telescope can be rotated up to 180°. It is considered to be more precise and speedy than the regular chain survey, compass or plane-table surveying and is commonly used in engineering fields for land surveying, route surveying and constructional surveys.

There are basically two classifications of theodolite;

If line of sight of the telescope can be reversed through the rotation of telescope by 180° about the trunnion axis in vertical plane, the theodolite is known as transit theodolite. This type of theodolite is commonly used for surveying. 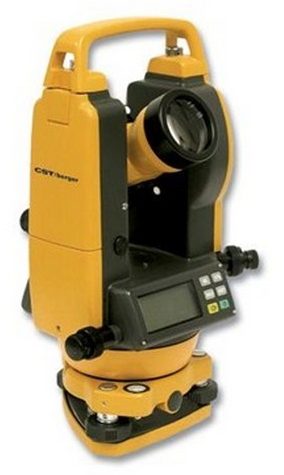 If the telescope of a theodolite cannot be revolved about the trunnion axis, it is known as a non-transit theodolite. This type of theodolite is obsolete now.

Vernier theodolite is the type of theodolite in which the graduated circle is read with the help of Vernier.

Micrometer theodolite is that type of theodolite in which micrometer is provided for reading out graduated circle.

The following terms should be remembered while dealing with a transit theodolite;

It is the process of setting theodolite exactly over the station using a plumb bob.

It means to bring the telescope upside down for pointing in opposite direction by 180° revolution of the telescope about horizontal axis in vertical plane. It is also known as plunging or reversing.

It is the process of rotating the telescope of the theodolite 180° about the vertical axis in horizontal plane.

It is also termed as line of sight and is defined as an imaginary line joining the point of intersection of cross-hairs of the diaphragm and the optical centre of the object glass and its continuation.

It is a line joining the optical center of the object glass and the center of the eye piece. It must be parallel to line of collimation.

9)Axis of Level or Bubble Tube:

It is the straight line tangential to the longitudinal curve of the level tube at the center of the tube. It must be perpendicular to the vertical axis.

Following are the two types of adjustments of the theodolite;

This type of adjustment is important for accurate observations and is made to establish relationship between the fundamental lines of a theodolite. These adjustments include;

This type of adjustments is made whenever the instrument is set before taking observations. It includes;

It is important to know about all the parts of a theodolite and their functions in order to minimize errors during surveying. Figure 5 represents some of components of the theodolite. 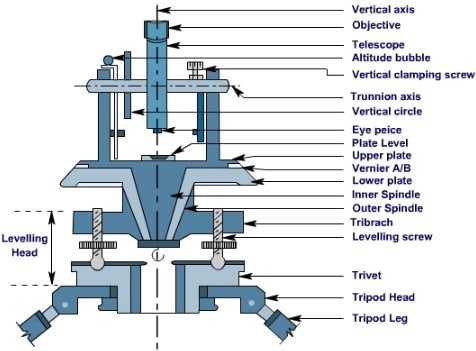 Following is the brief description about components of a theodolite;

The telescope is the important part of the theodolite and is mounted directly on horizontal axis (Trunnion axis). It can rotate about horizontal axis in vertical plane and is used for viewing objects.

Figure 6: Diagram of Telescope of a Theodolite

Trunnion axis is the horizontal axis of the theodolite about which telescope rotates.

Vernier circle is a graduated circle rigidly fixed to the Trunnion axis of the telescope and is used for measuring vertical angles.

Plate levels are carried by the upper plate and enable the telescope to settle in an exact vertical position.

The standards resemble the letter ‘A’ and are therefore also known as A-frame. They are used for supporting the telescope and allow its rotation about vertical axis.

Upper plate is connected to the inner axis and supports the standards. It is also used for regular rotation of telescope and standards for correct measurements.

Lower plate or scale plate is the base of the entire instrument, connected tightly to the tripod assembly. It is used for measuring horizontal angles.

A tripod is a solid of framed stand, equipped with steel shoes for firm grip on the ground. It is used for mounting the theodolite.

At the very bottom of the inner axis, there is a hook used for suspending the plumb bob. The purpose of plumb bob is to precisely center the instrument over the marked station.

The clip screw is fitted at the lower end of the clipping arm for slightly rotating the index arm for adjustments. It is also used for centering the bubble of altitude level tube.

Altitude level tube is fitted over the telescope and is helpful in testing whether the Trunnion axis is horizontal or not.

Compass is attached to the A-frame of the theodolite and is helpful in taking bearings.

The shifting head lies below the lower plate and is used for centralizing the complete instrument over the benchmark position.

Along with the clamping screws of upper and lower plates are attached tangent screws, used for the fine movements of the plates.

The foot screws are conversed in trivet by ball-and-socket arrangement and are used for leveling the instrument.

Tribrach is the bottom most assembly of the theodolite screwed on top of the tripod.

Spirit Level, also known as bubble level, is designed to specify whether the surface of theodolite is horizontal or vertical. 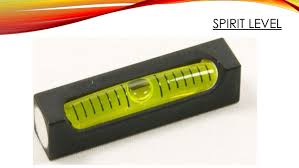 Theodolite Surveying is carried out for many purposes, some of which are stated below;

Definition of leveling: Leveling is generally followed technique to obtain the elevation of one point relative to another.…

Definition of contouring: Contouring is the method used in surveying to determine the elevation of the points and…

In this type of survey, graphs are plotted using those observations that are made in the field, plotting…